Genesis 2 YAHUAH is the Provider. He is not simply a provider—one of several different providers. Instead, He is the one and only provider. Genesis 2 shows several ways that YAHUAH is the provider.

Genesis 2:1-3 YAHUAH provided for creation which includes man to have a day of rest. He provided rest for man and creation.

Genesis 2:5-6 YAHUAH provided water for plants and the herbs of the field.

Genesis 2:8-9 YAHUAH provided a home for man and food for man.

John 2:3-5 This is not random that YAHUSHA’s mother is prominently featured here in initiating or activating YAHUSHA in public ministry. Could it be that YAHUAH in His Word, by featuring Mary, YAHUSHA’s mother, was illustrating that he was reversing what Eve did in the garden. It was at the hand and device of a woman that Adam fell and thus the world as well. Here in John 2, it was at the initiative of a woman that the Messiah, the One sent to take away the sin of the world (John 1:29), was brought into full view into the public arena. 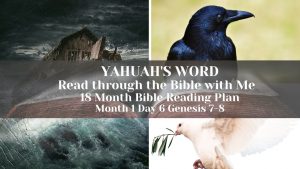 Passover: The Work Is Finished