Genesis 1:1 Who is YAHUAH? The Creator. There is none other beside Him. This is the first and foremost Truth to know about YAHUAH. This is plainly stated in Genesis 1:1. The rest of the chapter gives details of creation of which YAHUAH is the one and only Creator.

Genesis 1:1-2 YAHUAH is only good (Matthew 19:7). Verse 2 is opposite of who YAHUAH is. This verse speaks of darkness—chaos. Something happened between Genesis 1:1 and Genesis 1:2 that YAHUAH had to correct.

Genesis 1:2 This verse reveals the patten for permanent transformation. Man was nowhere around to effect this change. Genesis 1:2 says that the Ruach of Elohim moved upon the waters.

So, when we see around us, those who speak of change and transformation on any level and in any situation, and the Ruach of Elohim is nowhere to be seen in the man-imagined schemes, programs and plans for change, be aware that surely beneath the surface the wicked one is pulling the strings.

What does YAH’s Word say about the proposed change/transformation? We will only know the answer to this question if we, ourselves, read His Word to know what is in His Word AND if we humbly endeavor to walk out His Word day by day.

Genesis 1:3 Genesis 1:3 shows us not only a pattern for change/transformation but look closely and you will also see the prerequisite for restoration. The earth needed restoration from darkness (Gen. 1:2). Restoration must be initiated by separation.

YAHUAH first separated the light from the darkness to initiate the process of restoring the earth to what it was in Genesis 1:1. We must likewise separate from darkness if we too want to experience restoration.

We want relationships restored. Then we must separate from the darkness of pride and unforgiveness. Name the life experience; identify the need for separation in specific dark areas, then do the work (not a theologically dirty word) of walking out that separation by the grace of YAH and then experience the restoration by the might of our Creator. No separation = no (for real, transformative) restoration.

The first step toward restoration and even recovery is separation. The wicked one knows this pattern as well. He uses this to restore the world into the chaos that was present in Genesis 1:2. He separates marriages, children, families, ethnic groups, cities, genders, etc.

YAHUSHA said that he came to separate as well (Matthew 10:34). YAHUAH’s Word is a two-edged sword that is His weapon of separation (see Ephesians 6:17; Hebrews 4:12). The greatest Separator is YAHUAH. However, He does not separate to create chaos and death. He separates unto life.

Genesis 1:6 YAHUAH divided (separated) the waters from the waters.

Genesis 1:9 YAHUAH separated the waters from the land.

John 1:1 YAHUSHA is YAHUAH made flesh.

John 1:3 YAHUSHA is our Creator made flesh.

John 1:11 His own was in the world. Who are his own? An initial reading of this, we may think that he is speaking of YAHUSHA’s own natural family. I think, however, that this verse speaks of Israel as a whole (Ephraim & Judah) (see Matt. 10:6; 15:24). Although Ephraim was divorced from YAHUAH and Judah was put away because of idolatry/apostasy, they were still His. Once redeemed in Egypt for the first Passover and covenanted with at Sinai, Israel, and all those who joined themselves to Israel and walked out of Egypt with them, became sealed as the “His own” written about in John 1:11. Though individual lostness can be experienced by individuals of Israel, YAH never recalled His redemption and ownership of the collective seed of Abraham, the House of Israel, even though He had to divorce Ephraim and send away Judah. His covenant with Israel is everlasting. (see also Genesis 17:7, Hebrews 13:20) Covenant is permanent until death. Covenant is not the same as a contract that can be broken. The seed of Abraham is still present on this earth. The Abrahamic covenant still stands. YAH will never, ever break covenant. In conclusion, this verse does not speak of YAHUSHA’S natural family.

John 1:17 The word, “but” is italicized which means that this word was not in the original text. Reread this verse while omitting the “but” and experience the difference. The Law that Moses was the facilitator of and YAHUSHA are not mutually exclusive.

John 1:19 They knew to first settle the question of “Who.” Likewise, for us, our primary, most important questions of all are these: Who is YAHUAH? Who is YAHUSHA? Who is our Creator? We are not to first ask, “Who am I?” It is impossible to fully know who we are apart from knowing who our Creator is.

John 1:42-51 YAHUSHA knew beforehand who he would call to be his disciples and later apostles. Likewise, YAH’s purpose for us was also known and established even before we arrived on this earth. I believe that the wicked one somehow knows as well. Hence the opposition and targeting even in the mother’s womb and from birth of those destined to do damage to his plans and schemes for mankind (see also Matt. 2:2; Ps. 139:13-16; Rom. 11:29)

John 1:49 Nathanael began on the right foot, knowing Who YAHUSHA is. 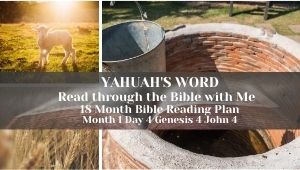 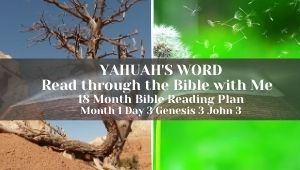 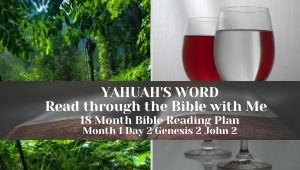